The Blackjack Quilt and Its Baby 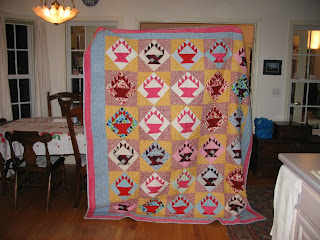 Sometimes an old quilt just fires your imagination and such was the case when I saw and fell in love with Anne Hope Marvin's vintage Basket quilt. Anne Hope had been given the Basket quilt top by a friend--who had gotten it from her mother--who had received it from a fellow Eastern Star member. Anne has a strong streak of bird dog in her so she searched out the Eastern Star lady and ascertained that the friend was the second wife of one Mr. William Smith of Blackjack, North Carolina. And it was Mr. Smith’s first wife, Verna Deal Smith, who had originally made the quilt top. Whew! If you're Southern you'll understand that we had to hunt down all the family connections....

Having ascertained the quilt’s maker, Anne proceeded to add the pink borders and to hand quilt the piece. Evidently the quilt top had its own loopy charm, as in, it wouldn’t lay flat and had been deemed un-quiltable by its former owners. But as Anne the eternal optimist explained, “The colors were wonderful and Verna’s passing familiarity with the concept of a right angle was not a deterrent to me.”

I drafted Anne Hope's Basket pattern and after studying the vintage quilt, made a wall hanging in its honor that I felt was scrappy and odd enough to be the old quilt's descendant. I call it 'Blackjack Baby.' 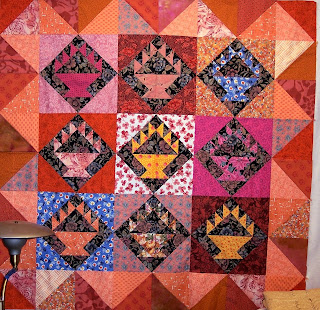 The set (arrangement) of this wall hanging used one of my favorite tricks for defining a border---split blocks around the outside of the patchwork into two opposing triangles light vs. dark and zig-zag 'em next to each other for an interesting final dark triangular border. By the way, this works only if the number of blocks is odd (3, 5, etc) as with an even number, the corners won't work out right.
Posted by Pepper Cory at 5:28 PM 2 comments: