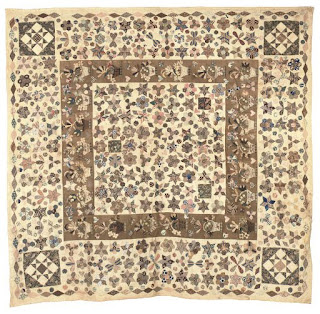 Called 'mosaic patchwork', English quiltmakers had been working with the hexagon since the mid-19th century. Perhaps inspired by beautiful marquetry boxes and tiles from the Middle East,  English quilters cut hexagonal shapes from paper, basted a fragment of fabric over the hexagon and when enough patches were made, whip-stitched the patches together from the front of the work in rings of six patches around a center hexagon. The comparison to a flower--petals around a center- was inevitable.
In the 1920s the hexagon patch, long the favorite quilt pattern in Great Britain, steadily worked its way onto the American quilt scene. The attraction to the six-sided shape is easy to understand. The hexagon patch was small, portable, and easy to arrange in rings ('rosettes' to the Brits) and seemed a graceful thrifty way to use all those sweet novelty prints just coming onto the market. But American quilters, used to working scrap-style with tiny pieces of fabric, dispensed with the English paper under-patches and simple sewed hexagons together with a running stitch as usual. Someone here labelled the hexagon pattern Grandmother's Flower Garden, a tribute title of an earlier time. All things Colonial American were hugely popular in the 1920s. You might, in reading history of the time, think of the phrase 'Roaring 20s' but truthfully, most Americans, outside of large cities, thought that bathtub gin, flappers, and jazz were a passing fancy. Thousands more were picking themselves up from the flu pandemic, World War I, and trying hard to earn enough money to buy their own Model T Ford. It was business as usual and quilting was undergoing yet another rise in popularity. 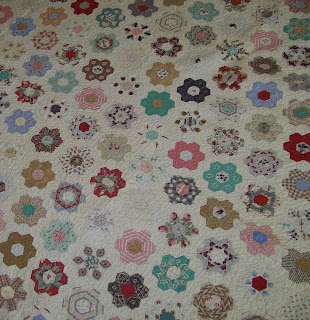 Once when at a flea market, I spied what I thought was  an average Grandmother's Flower Garden quilt in the pile and pulled the quilt out to examine. However this was far more than a common 1930s GFG--it was a late19th century English-sewn mosaic quilt and now it lives with me.

The last picture shows that the patches were whip-stitched together from the front plus the edges of the quilt were knife-edged. That means the layers folded in towards each and sewn together. 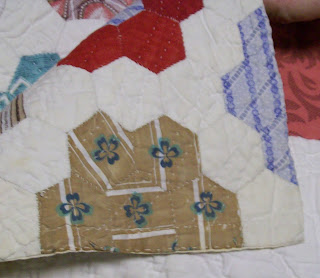