If you were a fan of Peter Pan, then the title of this blog makes sense. The lyrics of "I won't grow up!" were pretty much my personal theme song until I turned 30. Lordie, I do love the internet and was delighted to find Mary Martin still doing her thing on YouTube
http://www.youtube.com/watch?v=giQFjf6ih80 .

J.M. Barrie, the author of Peter Pan in Kensington Gardens (1906), probably had no idea how long his half-boy/half-fairy character Peter would live on in the imagination of children. Quilt designer Ruby Short McKim also brought Peter Pan to life when she published a Peter Pan series quilt in the children's section of The Kansan newspaper in 1926. The directions were that you should save and trace each pattern as it appeared and then there would be a contest, both for a little girl quiltmaker and a team (teacher+child) sponsored by that school's PTA. The first prize, for the best quilt, was for $10 and the team prize was $5.

Great news! Ms. McKim's original Peter Pan series quilt patterns are still available! You can contact Merrily McKim (Ruby's grand daughter) at this site: http://www.mckimstudios.com and then click the Series Quilt button and get the Peter Pan patterns right from the source. Merrily has digitized and straightened the old newspaper drawings and they are a delight.

I am addicted to ebay trolling and occasionally turn up a gem. Last November, I found a never-used quilt top in the Mckim Peter Pan pattern and it's now mine! Here are a few pictures. The lost boys left, and a graceful Princess Tigerlily, and of course a pirate. 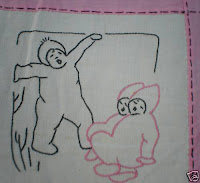 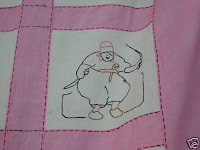 Now I can hum myself to sleep with "I won't grow up!" and snooze peacefully under the vintage quilt.
Posted by Pepper Cory at 3:24 PM 2 comments: