This September I get to go to the North Carolina mountains again and teach for a week at John C. Campbell Folk School.
Go here if you want to learn more https://www.folkschool.org/index.php .


Two years ago I had a blast at JCC and they invited me back. This time the week I teach is called Scottish Heritage Week and the class is In Praise of Plaids. Now I'm deep into making not only the class sample but it's also the plaid quilt that's been running around in my head for years. The mission was to make a sampler quilt (uses different blocks) but somehow tie the whole thing together using plaids. Not surprisingly, the quilt's shaping up as very vintage in style.

First I mined my own inventory of old blocks. Not hard. I never throw work away. Notice the label. 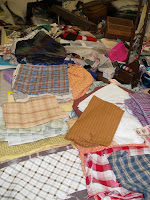 Then I needed to go find every plaid I could lay hands on. Seeing as how my stash is 30 years old, I have a few possibilities. And the occasion was a grand excuse for purchasing a few more plaids as well. 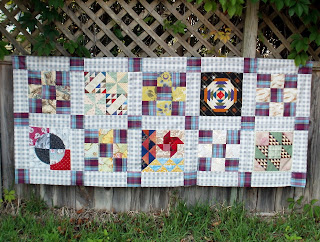 The quilt is shaping up to be, hmmm, rather large in size. As I tripped over the top while ironing the first two rows, the project gave me pause. Pinning it on the studio back fence for a photo was the only way to get distance on the project. Right now the quilt is 80" wide and there's still five additional rows to be added to its eventual length of 116". Right after thinking, "This might be god-awful-" the janitor at the building leaned out the door and yelled, "Hat's purty!" so I guess I'll trust his judgement. 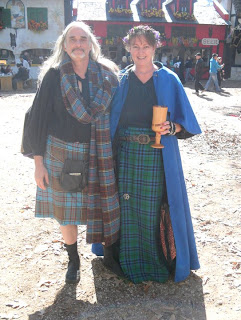 So we will persist. As a Scot, stubbornness is an inbred trait. Granted, our tribe is also fashion-conscious. Witness my brother Chris with his wife Catherine at a Renaissance Fair. Both are outfitted in their respective clan plaids. 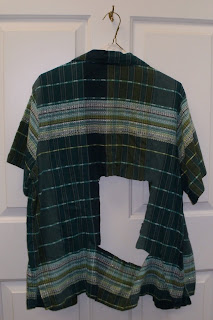 The nice plaid shirt will die a noble death as it gets used in this quilt.
Posted by Pepper Cory at 6:09 PM 6 comments:

Two More Quilts for the Collection 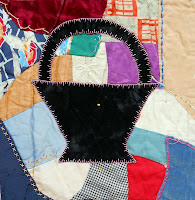 Why do I collect old quilts? And what determines how much I can spend? These days, the latter concern is very real. I am spending a lot less on my hobby and much more time on my career. Never mind that they're both quilt-related. I've been a quilt collector since I've been a quilter (middle 1970s) and a quilt teacher the same length of time. 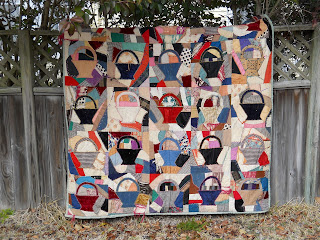 Recently I added two more quilts to my collection. One was on purpose: I watched the ebay auction and snagged it when no one was looking. It cost less than $45, my upper limit these days. It arrived a bit more ragged than I'd anticipated. But I still love the look--somewhat Art Deco crazy but with a  folk-art feel since the basket motifs are boldly front-and-center in each block. 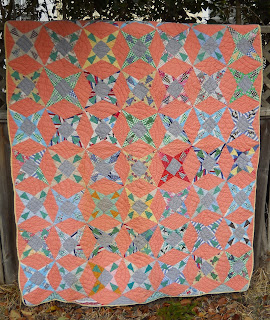 The second is a great treasure since it was a gift from my sister Lili. When she's not the doting grandmother to Rylee, or doing tax returns for her husband Stephen's accounting business, or managing apartment complexes, or doing the books for the local antique mall, Lil looks out for quilts that I might like. And she knows I have a thing for the color orange. She gave me the quilt as a gift back in November when her family came to the beach for a Thanksgiving visit. Beyer's Album of Quilt Blocks & Borders lists the name as Iowa Star and says it was published in the Ladies' Art Company catalog in 1928. 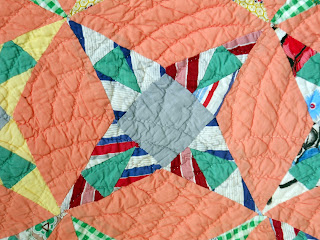 Lil said when the quilt came into the Georgetown, KY antique mall, she bought it since she thought I'd like it. She's right. Who could resist scrappy colorful stars against an orange sherbet background? From the prints, I think it was likely made in the 1940s. The quilting is in large overall fans or waves called Baptist Fans by some. I think the term stuck because the Baptists made it into print first!

Non-Quilt Thoughts on the New Year

Like my other blogs, Quilt Flap has been sadly ignored for months. But my thoughts today are wide-ranging. Looking through images of antique quilts is a pleasant way to waste an hour or two but it seems that a short message might be in order.

I apologize for not posting more regularly on Quilt Flap and, as soon as I get a better digital camera, I'll do so more often. The picture here was the last good one my camera took before it shut itself tighter than a clam. It's the view looking east on my street in Beaufort and taken early on the morning of January 1.


There are a few topics swirling around in my head but chief among them is that I'm lucky to be a quiltmaker. As one who gleefully combines plaids, dots, and striped fabric patches within the same composition, the lessons of the craft play out in a larger way in my life. Due to being a quilt teacher, I have gotten to travel and meet many different people who only have one thing in common: they love to make quilts. Occasionally I've taught in front of a class where English was not the common language. The solution to that challenge is to ask who is Dutch and who is Belgian in the class. Once hands are raised, I ask these folks to move around within the class. Since Dutch and Belgians are usually trilingual, between English-French-Dutch-German translations, we achieve a mutual understanding.

On very rare occasions, I have had to interrupt a class conversation that has strayed from the topic at hand and redirect folks' attention to their sewing. On two occasions the discussion (politics of course) has gotten downright heated. I hate that. But as the go-between middle child in real life, I've had practice in derailing people's confrontive instincts. Cut to last Saturday afternoon when, like the rest of America, I was shocked and saddened by news of the Tucson shootings And then learned that one of the victims was one of us--a woman who was a quiltmaker. Her name was Phyllis Schneck. I did not know her personally but in my mind she will always be associated with tolerance and goodwill. Ms. Schneck,  a Republican, had stopped at the Tucson grocery store that day to meet Democratic representative Gabrielle Giffords and was shot by the deranged gunman along with 19 other people.

One of the particular reasons I love this craft is that it brings people together for a positive reason. We can forget our differences and together achieve something bigger and better (like a quilt) than any small work we might make by ourselves. I'm hoping that the post-Tucson wave of tolerance and civility that the news hounds are talking about right now won't soon fade away. I hope divisive and disparaging remarks and diatribes by media commentators will pause or even cease. That's probably a pipe dream. But I live in hope. Here's what's on the back bumper of my truck. 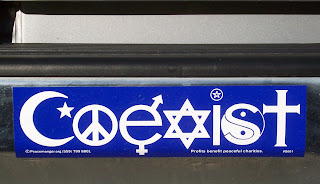