Their ignorance is my bliss 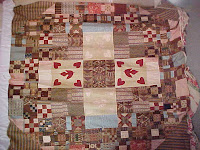 The online auction description was brief: 'Old unfinished quilt, some holes, has printing with word Harrison, good for cutter.' Oh really... A quick scan through the pictures and I started checking my wallet. Fortunately, I had only one rival who dropped out early and the quilt top came winging to my door, ignominiously swathed in a black plastic garbage bag and duct tape.

When I de-bagged the quilt top-what joy! It was what I'd hoped: an 1840s relic about which the seller was totally ignorant. He hadn't recognized that 'Harrison' meant 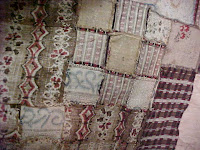 President William Henry Harrison, our 9th president. Nor that the log cabin images and whiskey barrel were all part of Harrison's campaign. What was likely cut up in this quilt top was a handkerchief from Harrison's 1840 presidential 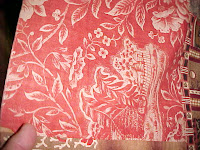 campaign. The quilt top was made in the English manner , that is, whip-stitched over paper templates.

Harrison was one interesting guy. He started out as a young man in medical school but ended up as a life-long soldier and earned the moniker 'Tippecanoe' in Indian wars. Later the name was part of the first American presidential campaign 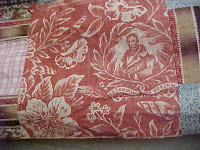 slogan--"Old Tippecanoe and Tyler too!" (John Tyler being his VP choice.) He also fathered ten children!

Harrison gave the longest inauguration speech on record, a thundering one hour and forty five minute declamation, delivered in a blowing snow storm. If you need reading matter to send you sleepy to bed, you can find that text here http://www.bartleby.com/124/pres26.html . Harrison also stood for hours and greeted well-wishers at the White House inauguration party. No wonder he caught pneumonia and was dead 32 days later. I wonder if the quilt top was put away when President Harrison died so suddenly?

PS-if you're an antique quilt nut, scroll down to the 'pin-up quilt' at the bottom of this page.
Posted by Pepper Cory at 9:17 PM 6 comments:

Scrapped Out and Hot 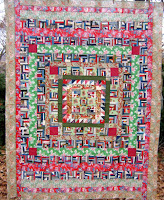 If you're throwing dice (playing craps) and you toss a 2,3, or 12, that's a losing throw and you 'crap out.' But in the dictionary of American slang, 'crapped out' also means to abandon something because you're tired of it.

When I comes across really complex or nutzo old quilt tops, I wonder if the maker "scrapped out." Perhaps constructing the top tired them out and they never got around to quilting the thing. Or they gave it to someone who was supposed to finish the quilt top but who never learned to sew. I'm thinking this might be the case here. My apologies-I can't remember where I got this picture--I'd filed it under 'inspirations' but hadn't noted the source. If it's yours-email me for credit.

When someone had access to lots of the same sort of scrap fabric, interesting compositions happened. Like this quilt top likely made from 'cut-aways' from a shirt factory. The close-up picture shows how involved the maker got 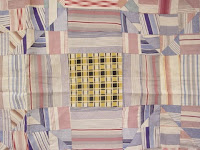 when dealing with these subtle stripes. Not to everyone's taste but I think an altogether engaging piece.

This quilt top was going great guns and then...the quiltmaker put it away and forgot about it? Or her fiance was lost at sea and she hadn't the heart to finish? Who knows! We could write volumes of fiction about the "what if" of our UFO's -unfinished objects to the non-quilters. 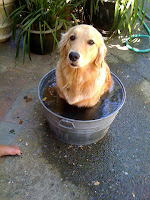 Plus, it's too hot to quilt right now here at the North Carolina coast. This is what I'd do if I could find a bucket to fit me!

Posted by Pepper Cory at 5:28 PM No comments: