Anonymous was a quilter 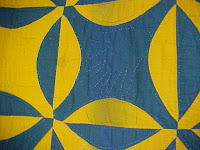 I first heard the phrase " Anonymous was a woman-" when I read Mirra Bank's book of the same name in the 1980s. But as I study and see yet more 'new' old quilts, I think that anonymous was truly a quilter.

Only rarely do I see a signed quilt but when I find a signature, it's a treasure. The name is sometimes quilted into the fabric's surface in same-color thread and is overlooked by the casual observer. Most often it's just the first name, revealing that the maker never thought this quilt might be viewed by someone who didn't know who she was and what her last name was. This Rob Peter to Pay Paul quilt I bought on ebay shows the quilter's hand outlined in stitches.

Although by any standards a huge piece of work, a handmade quilt large enough for the bed is removed from consideration as "art" since it is a practical domestic object. And it's not hung on the wall like a painting. And it was likely fabricated from common clothing scraps. And it was made by a female. Oh dear.

And then there's the 'say it loud, say it proud' group. In case you missed it, this woman's name began with an H. 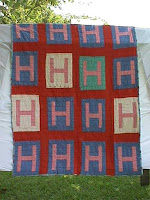