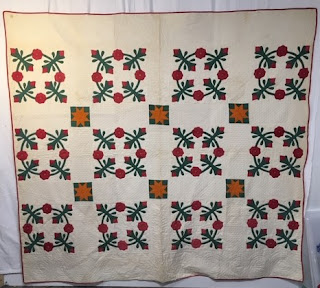 Red, green and white are the three colors we always associate with the holidays. But the splash of cheddar in this North Carolina Rose Wreath quilts does add a tiny quirky touch. Found it last November at a local antique mall in Morehead City. 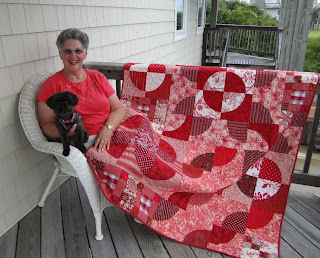 This red and white sampler quilt could certainly serve as holiday decoration but about five years ago I made it for my friend Fran Grossman whose favorite color is red. 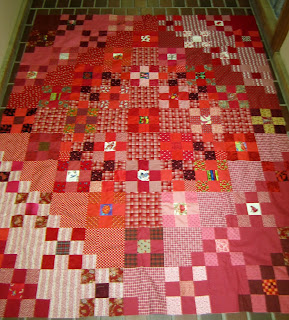 Come to think of it, my Mom's favorite color was also red and she made this quilt top. It's about time I got that out and finished it! 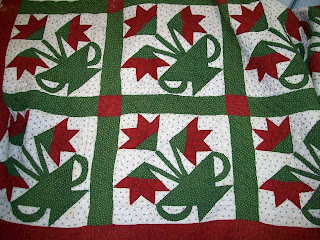 I think my all-time favorite is this North Carolina Lily. I bought this antique quilt at an auction. It's from Onslow County, N.C. January 1996-the very first year we lived in North Carolina. 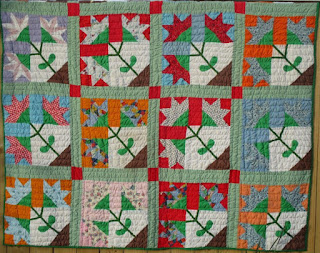 A couple of years back I bought a really neat North Carolina Lily quilt from a friend who lived in Michigan. She told me her father, an ardent junker, had found a trunk by the side of the road in Detroit and in it was this quilt! She and I both agree that this quilt was probably the work of a Southern quiltmaker and that wouldn't have been unlikely since so many Southerners moved to the Detroit area to work in the auto/airplane factories and munitions plants in World War II. I know it's not a strict red-and-green quilt but thought you might like to see it. It makes me smile every time I see it. 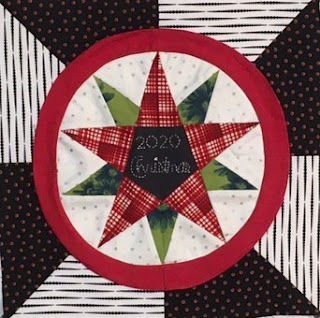 This year I made a red, white, yellow-green and black block for the Guild's Christmas exchange block.

Maybe my idea of what's really Christmas colors is changing? 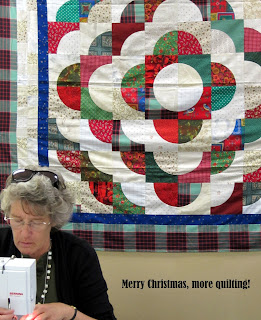 Change is my word of the year for 2021. The thing I missed most about 2020 and staying home to stay safe? Teaching. Meeting new people and teaching and encouraging folks to quilt is meat-and-drink for my soul. I hope we can do it again soon.

Posted by Pepper Cory at 8:30 PM No comments: 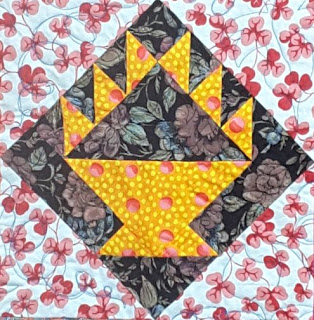 OK-my basket's not green-and-yellow. It's gold with bitty yellow spots and big pink polka dots. For whatever reason, quilters love baskets. Depicted as pieced quilt designs or serving as handy storage for quilters' sewing tools, the basket is a symbol of domesticity as much as a handmade patchwork quilt.

I have a few basket quilts in my collection and have made several basket quilts myself. However, I've never made a real basket and can only admit that I am an admirer of the art of basketry. 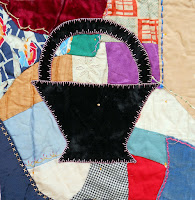 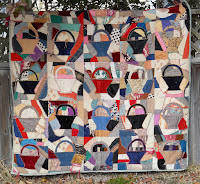 Showing a few vintage basket quilts now. This 1930s quilt of wool, silk, and rayon was an ebay treasure.

Advertised as being in good condition, this quilt was actually a tattered beauty. But when I got it up on the fence to photograph, I was taken with its loopy charm. Crazy quilt + appliqued baskets! 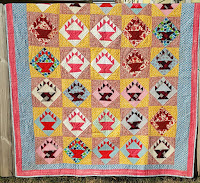 This 1940s Basket quilt belongs to my friend Anne Hope Marvin. She found it as an unfinished top and sewed on the pink and blue borders and hand quilted it. It's from a wide place in the road called Black Jack, North Carolina (after a tree of the same name) and so I call it Black Jack Baskets. 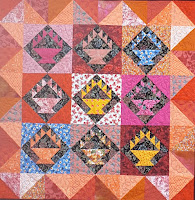 Black Jack Baskets inspired me to make a quilt of my own. Meet Black Jack Baby. Note: the quilt is not faded on the left. The picture was taken on a humid hotter-than-Hades day and the camera fogged up. 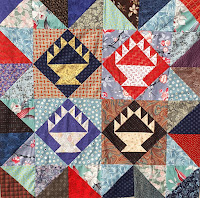 Baby now has a scrappy smaller sibling that is yet unquilted. 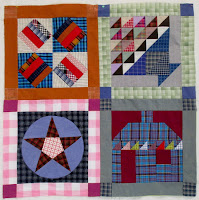 Baskets keep coming up in my quilts, even if only a singleton in a sampler. This little quilt top is from my plaids class and the basket block was certainly the most time-intensive block to sew. 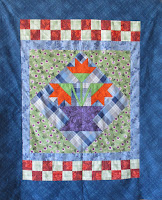 And if you put something in the basket, it's even more interesting. Here is a North Carolina Lily block in some of my favorite colors. Not quilted yet. 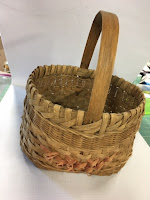 With times what they are, excursions to thrift stores are a treat. Obeying social distancing etc. etc. I
ventured in to a second-hand store today and came out with a basket as my prize.

Sue Williams, a master basket-maker friend, identified my thrift store basket as almost certainly hand woven from oak. Enjoy this short video about Sue and her work. She was awarded the 2019 Heritage Folklife Award from the governor of Tennessee. 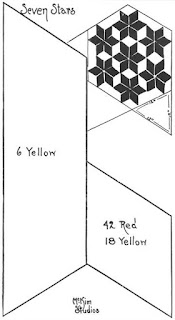 I'd always wanted a Seven Sisters (Seven Stars) quilt. All those little 60-degree diamonds and tiny triangles! Some quilt patterns you think you'll never make and if you're a quilt collector as well, these patterns are put on your 'bucket list.'

A little more than a month ago, I read a very average ebay description of a vintage quilt for sale. It was so boring "--old brown and green quilt--" that I'd normally never click on it. So glad I did! Up came a late 19th century Seven Sisters quilt. I watched the auction carefully and finally, at the last minute, placed a minimal bid. 'Seven' was mine! After some back-and-forth with the seller about shipping, I paid the Paypal invoice and waited.


A week later the quilt arrived in a recycled and battered box, bulging along the sides and one box seam splitting. I slit the packing tape very carefully wielding the knife sideways so as not to cut the quilt. And sure enough the quilt popped out of the box like those biscuits in a tube. The quilt hadn't been wrapped in paper or even put in a plastic garbage bag but rather just jammed in the old box and shipped. This sloppy treatment was a further clue (along with its unimaginative listing) that the quilt's seller didn't value the quilt highly. 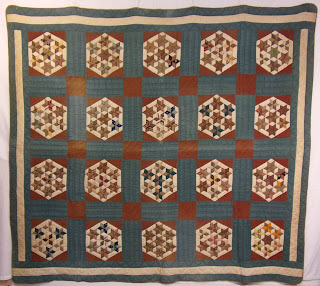 I couldn't wait to get Seven up on the flannel design wall to take pictures! The photo revealed a slightly sun-faded area that the ebay pic had not shown and its overall condition was good rather than mint as advertised. But I still love it! 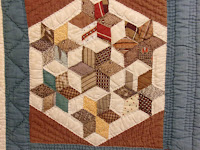 This Seven Sisters quilt has contained hexagonal blocks that finish into rectangles. Not a common method of dealing with a hexagonal block. The brown surrounding pieces also reach to touch brown squares where the teal green sashing crosses. It's a variant I haven't seen before. But the colors and the triple-bar border all scream 'Carolina.' Whether North or South I cannot say. Is the quilt actually an artifact of the Civil War? I'd say not as many of the fabrics in the patchwork date from the 1870s-1890s.

Ironically when I was putting the pictures of the Seven Sisters into a computer file, up popped two images of another Seven Sisters quilt. This is a quilt top and it is somewhere here in the shed, stored high above my head on the 8' shelf, folded with all the other vintage tops. 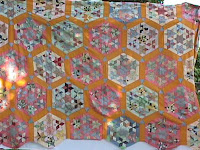 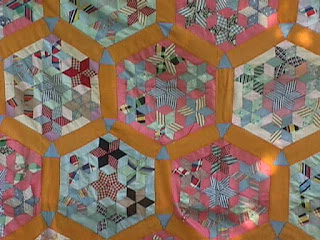 Excuse the crummy photos--these were taken with an ancient camera on a sunny and windy day while the quilt top hung on the clothesline. Since then I've become a somewhat more competent picture-taker. This quilt top has a different set than the new quilt. Here long bars of cheddar with tiny blue triangles keep the patchwork hexagons twirling over the surface of the quilt.

If you'd like to learn more about Seven Sisters, I'd suggest you peruse Barbara Brackman's Civil War Quilts blog.